By Gentle Transitions on August 1, 2009 in Press 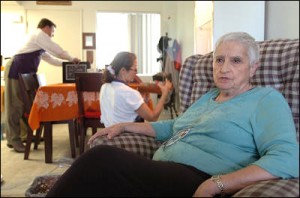 Gentle Transitions is a company that helps senior citizens move from their homes to retirement communities. Their personnel help with decisions about what items to keep, packing, setting up utilities and moving. Pearl Davis shares her experience with GT as company president Greg Gunderson and move manager Maria Rajaratnam organize her belongings in her new Manhattan Beach home. (Robert Casillas/Staff Photographer)

In her bedroom, a hodgepodge of knickknacks are scattered on a desk; in the bathroom, a bounty of toiletries is stashed in cabinets; and everywhere, her long-held collection of paintings and photographs hang on the walls.

To think, she’s only been here five days.

“What makes it home? It’s the things that mean something to you,” said Davis, 83, who recently moved from her longtime three-bedroom house in Redondo Beach to a senior living facility in Manhattan Beach. “That’s the mindset you have to have.”

At her age, she admitted, moving is a challenging proposition. For one, she can’t lift most things. And the stress of downsizing from a 1,500-square-foot house to a 650-square-foot apartment can be “overwhelming.”

Which is why Davis enlisted the help of Manhattan Beach-based Gentle Transitions, a company that specializes in relocation for seniors.

“It is a very emotional, stressful thing,” Davis said. “Without this kind of company, there was no way I could do this.”

Started by Greg Gunderson in 1994, Gentle Transitions is one of a growing number of companies dedicated to moving – “resettling,” as Gunderson likes to call it – senior citizens.

Most seniors downsize to a smaller apartment or senior living facility after the loss of a spouse, to be closer to medical care, or when mounting home bills become too much to handle.

Gentle Transitions is no ordinary moving company. Along with packing and unpacking household items, Gentle Transitions also handles the tedium of relocation – from filling out change of address forms and setting up utilities, to putting together appliances and hanging artwork on the wall.

The company also goes over floor plans to help clients determine where – and which – furniture will go into their new residence.

Since its inception, Gentle Transitions has moved more than 4,000 seniors and has been featured in Good Housekeeping and Money magazines.

“Many of my clients have been in a home longer than we’ve been alive,” Gunderson said. “Many thought the only way they were going to leave was feet first; they didn’t plan to walk out of their house to move to somewhere else, so it’s a big, big deal for most seniors.” 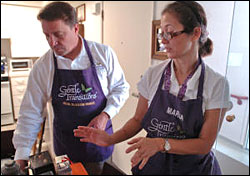 His average client’s move costs about $2,500 from start to finish and involves moving from a three-bedroom to a one-bedroom home.

For most seniors, Gunderson said, the hardest part is figuring out what not to take with them. And while Gentle Transitions can discuss options for giving these things away (the company doesn’t arrange estate sales but can refer clients to those who do), parting with old memories is hard on anyone.

“These people have collected things all along the way and they’re very attached to their things,” he said. “We don’t make decisions for people, but we can help organize and facilitate that process so it takes less time and is less stressful.”

It’s a process that helps not just the seniors, but their adult children as well.

“Even between family members who get along well, moving brings about friction,” Gunderson said. “A big part of what we do is managing family dynamics.”

Of course, clients don’t have to listen.

For Davis, an East Coast native accustomed to the frenzied shuffle of big moves, Gentle Transitions was markedly different than a traditional moving company.

“The difference is that they consult you every step of the way,” she said. “They care about how you feel, what you want, and they’re there at the other end.”

That sentiment was echoed by Pamela Thames, who moved her 91-year-old father – and her elderly aunt and uncle – with the company.

“They’re practically in our family tradition,” said Thames, whose father recently moved to a retirement community in Seal Beach. “My father has lived in his home for 35 years. We’re talking about a traumatic event which is handled with absolute grace.”

Thames said she learned about Gentle Transitions from a cousin who worked at an Alzheimer’s facility.

It’s not just her father who is dealing with change. After losing her mother just six months ago, the move is hard on Thames, too.

“This is breaking up the family home,” she said. “My mother died, and now we’re face-to-face with the consequences of her not being here.”

She added that hiring a company to deal with the logistics makes it easier.

“Now I have the time to do what’s really important, which is help my father deal with this emotionally,” she said. “We’re coming to grips with change with a capital C.”

Moving Mom or Dad is No Easy Thing!

There's no obligation when you meet with one of our move managers in person! Schedule it now! 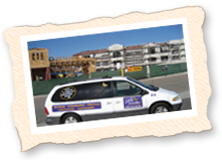